Tablets seem to have gained more currency in these times of pandemic, especially since strict lockdowns were imposed to control the spread of coronavirus earlier this year. Most working professionals and students have been depending on remote working and online classes, and tablets prove very effective for this purpose.


There has been little activity in the mid-range Android tablet market lately, so that has left the market open for the likes of Apple and Samsung, both of which have come up with a bunch of offerings — the Apple iPad 8th generation and Samsung Galaxy Tab S6 Lite (review) for example.


For those looking for the latest tab and do not wish to pay too much, Samsung’s Galaxy Tab A7 seems a decent proposition. Starting at Rs 17,999, the tablet comes with a 10.40-inch touchscreen display and offers a long battery life.


Let’s find out in this review if the Galaxy Tab A7 makes for a good second screen for online classes and basic work, besides the usual entertainment consumption. 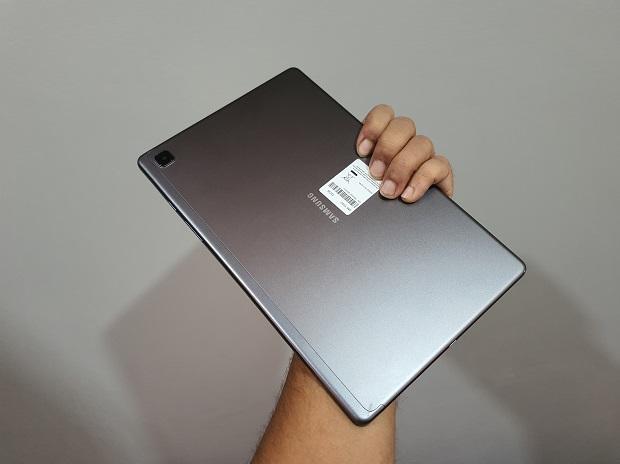 What we have here is a slim tablet with a solid build. The metal finish at the back gives it a premium feel, something we have seen in the Galaxy Tab S6 Lite as well. With a 7mm thickness and 476gm weight, the 10.40-inch screen tablet is really handy and light.


The Galaxy Tab A7 comes in grey, silver and gold colour options. We reviewed the grey variant.


The screen is surrounded by thick bezels that reduce the overall appeal of the device. On the right edge sits the power button and the volume rocker. And on the lower left edge is the microSD card tray.


Apart from that, the Galaxy Tab A7 has quad speakers – two placed on top and two at the bottom if you hold the tab vertically. The speakers are quite loud and we will lay stress on those later. The Galaxy Tab A7 has a 10.4-inch display with a 2000 x 1200 resolution (224 PPI pixel density). It’s an LCD panel that may not seem too crisp. You may not enjoy reading or streaming media if you’ve used a better display in your phone or other tablet. But since it’s a budget offering, you might be willing to make some compromises. The touch response, though, is decent enough.


The Galaxy Tab A7 has a Snapdragon 662 processor, which allows the tablet to perform well on basic tasks such as browsing, streaming, and gaming to some extent.


You can keep multiple apps open and juggle between them and there won’t be much lag during the activity. Gaming can be done, but only up to an extent; you may not enjoy heavy games like Call of Duty. For that, you might have to tweak the games settings a bit so that the tab can handle it well.


The tablet runs on Android 10 with Samsung’s One UI 2.5 on it. The UI seems simple and basic, and goes well with the overall scheme. For those familiar with Samsung phones, this would feel like just another device. When it comes to camera, the Galaxy Tab A7 has an 8MP lens on the rear and a 5MP front shooter. It wouldn’t be fair to expect great pictures or videos, but the cameras are good enough for video calls. The face unlock is quicker than we had expected.


We felt a stylus would have made things much better for those looking for some productivity, just as in the case of Galaxy S6 Lite. But there is a considerable price difference between the two. The Galaxy Tab A7 has a 7040mAh battery capacity with 15W fast-charging support. The battery backup is impressive as it easily gives you 6-7 hours of runtime. We could watch back-to-back IPL matches during weekends with just a single charge. The battery doesn’t drain out in a hurry. 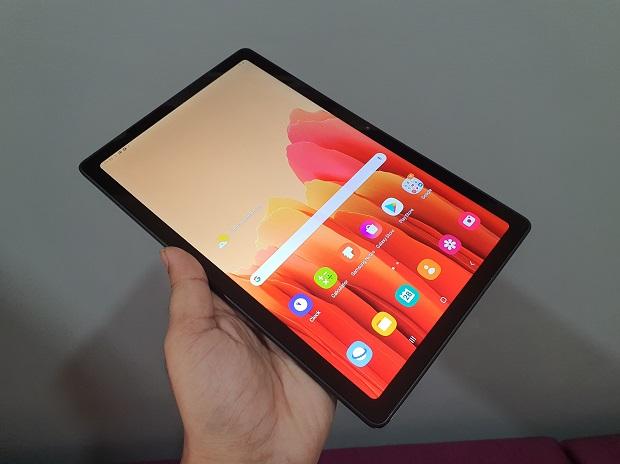 The Galaxy Tab A7 fares well if you consider it for basic work. It can be a good companion for media consumption, online classes, Zoom meetings, etc, even though it’s not the best in business when it comes to productivity. But its impressive battery life with fast-charging support and decent performance makes it a worthy option if you don’t plan to spend too much and want the latest Android tablet to use as a secondary screen.