Another wave of states is preparing to lift coronavirus restrictions in the United States this week – against the warnings of many public health experts as the White House sees this month’s jobless rate hitting 16 percent or higher.

Health experts say increased human interaction could spark a new wave of cases of COVID-19, the respiratory disease caused by the highly contagious virus that has already killed more than 54,300 Americans.

Colorado, Mississippi, Minnesota, Montana and Tennessee will join other states beginning an experiment to reopen economies without the testing and contact-tracing infrastructure health experts say is needed to prevent a resurgence of infections, with lives in the balance.

Georgia, Oklahoma, Alaska and South Carolina have already taken steps to restart their economies following a month of government-ordered lockdowns.

Those unprecedented restrictions resulted in a record 26.5 million Americans filing for unemployment benefits since mid-March. The nonpartisan Congressional Budget Office (CBO) predicted on Friday that the economy would contract at nearly a 40 percent annual rate in the second quarter.

Even next year, the CBO forecast the unemployment rate averaging above 10 percent.

“I think the next couple of months are going to look terrible,” Hassett said on Sunday. “You’re going to see numbers as bad as anything we’ve ever seen before.”

Against a backdrop of scattered protests across the country calling for stay-at-home orders to be lifted, US coronavirus cases topped 940,000 on Sunday after posting a record one-day increase on Friday.

New York and other states have extended restrictions to mid-May. New York reported 367 new deaths on Sunday, its lowest increase since March 30. Democratic Governor Andrew Cuomo said construction and manufacturing would be the first businesses to reopen and could restart after May 15 in the upstate region with certain precautions and if cases continue to decline. 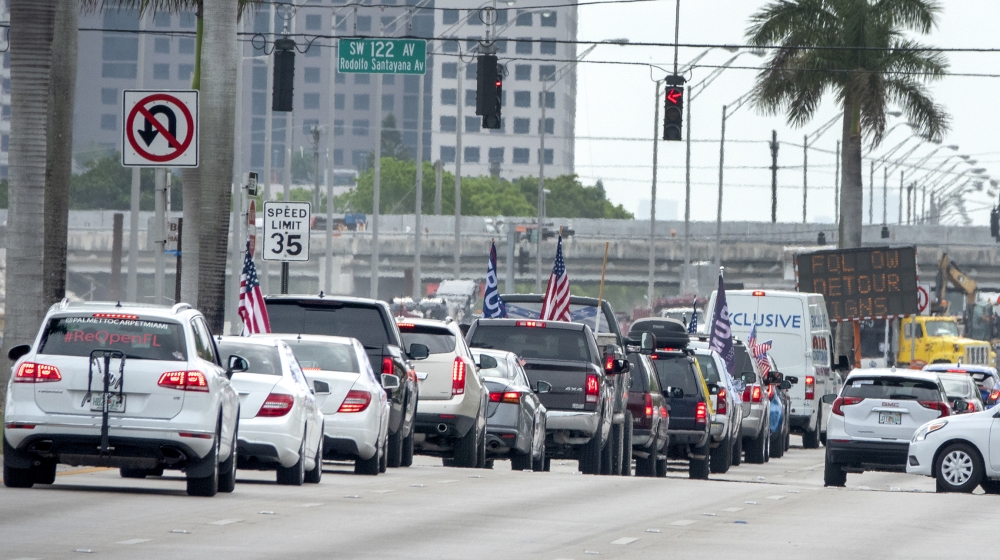 Other states, mainly those with Republican governors, have taken a more aggressive approach.

Montana, which reported three new cases on Sunday, is allowing businesses to reopen Monday if they limit capacity and practice social distancing, while Minnesota will let some businesses restart on Monday, allowing 80,000 to 100,000 people in the industrial, manufacturing and office jobs to go back to work.

In Colorado, Democratic Governor Jared Polis has given the green light for retail curbside pickup to begin on Monday.

Hair salons, barbershops and tattoo parlors can open on Friday, with retail stores, restaurants and movie theatres to follow.

Royal Rose is reopening her tattoo studio in Greeley, Colorado this week after closing a month ago, not because she wants to but because the bills are piling up and she says she has no choice.

“I would stay home if the government encouraged that, but they’re not, they’re saying ‘Hey, the best thing to do is go back to work, even though it might be risky,'” said Rose, 39, sitting inside her salon in a wood-sided building on a leafy street in Greeley, a farming and oil town.

But the lifting of restrictions is not uniform across most states. For example, Denver extended stay-at-home orders to May 8, but city dwellers can drive to a nearby county for a haircut. Georgia prohibited any local laws stricter than the state law.

Several opinion polls have shown a bipartisan majority of Americans want to remain at home to protect themselves from the coronavirus, despite the impact on the economy.

The source said the singer “is offering half-a-million dollars to anyone who has her two dogs, no questions asked. Anyone

Miscalculating Sinema and Manchin could end up costing Biden