Jambalo, Cauca, Colombia – Since he was a teenager, Edinson Quiguanas has helped patrol the roadside checkpoints on the outskirts of his Indigenous village in rural Colombia. This time, his orders are different: no one enters and no one leaves.

“Before, we protected the community by watching for armed groups,” he said. “Now the threat is something you can’t see.”

Colombian President Ivan Duque ordered a nationwide lockdown that began on March 24 to control the spread of the novel coronavirus, which has infected more than 5,142 people and infected 233.

Indigenous groups, faced with their own challenges and risks in fighting COVID-19, are taking matters into their own hands. More than 15,000 unarmed guardians from the Guardia Indigena (Indigenous Guardians or Guards), a civilian, community defence force, have mobilised throughout the country to prevent the virus from reaching Indigenous reserves, enforcing the command #QuedateEnElTerritorio, or “stay in the territory”.

Translation: The Yanacona people together with men and women peasant farmers are [taking] territorial control to prevent the spread of the pandemic in the Kwesx Kiwe Nasa reservation.

“We already have the infrastructure in place from dealing with the violence for so long,” Robert Molina, a coordinator of the force, told Al Jazeera. He directs the Guardian programme for the Regional Indigenous Organization of Cauca (CRIC). The mountainous, southwestern state of Cauca has always been one of the most war-afflicted parts of Colombia throughout its more than 50 years of armed conflict. Communities caught in the crossfire for generations formed the Guardia as a grassroots peace-building mechanism, but now they face the unprecedented challenge of blocking a pandemic. 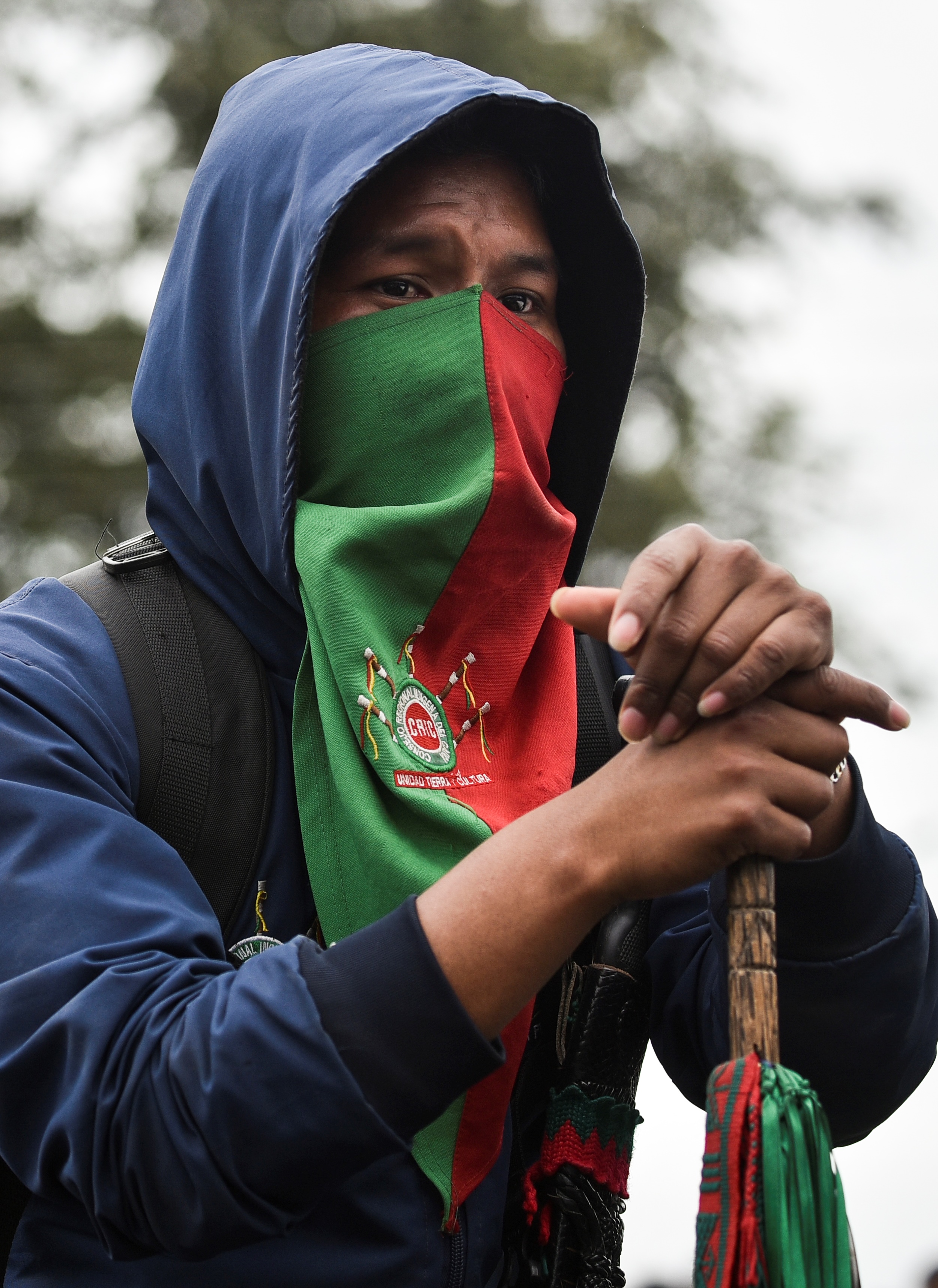 Members of the Guard patrol 24 hours a day at 375 different checkpoints throughout Cauca. While some of the 9,000 Guardians wear face masks, others protect themselves with the same red and green bandanas they have always worn as a show of allegiance to Indigenous resistance in the state.

Indigenous leaders in Cauca have petitioned local government officials for the Guardia to receive more medical supplies and state remuneration for enforcing the quarantine.

“There’s more control of the pandemic inside our territories than outside,” Robert said. “But we’re worried because supplies and money is running out.

‘A test of autonomy’

Colombia has 102 Indigenous groups who speak 65 different languages. Decades of activism in Cauca helped earn Indigenous peoples constitutional protections to self-govern their collective land holdings, called resguardos, through a council system that operates independently from the Colombian state. Their autonomy rights also guarantee the ability to practise culturally specific education and healthcare. Indigenous leaders are activating all of these systems to work together against the threats of COVID-19.

“This is truly a test of our autonomy as Indigenous peoples,” said Jhoe Sauka, the human rights commissioner of the CRIC. “Can we prevent infection by sealing off our territories? Can we grow our own food, use our cultural knowledge?”

Earlier this month, a delegation of Indigenous authorities convened with spiritual healers known by the Nasa people as The’walas in the lush mountains of northern Cauca. They hiked to sacred sites at dusk to perform harmonisation rituals designed to stave off disease on a territorial scale. In addition to following public health recommendations from the World Health Organization, the National Indigenous Organization of Colombia (ONIC) is advising communities to practise their traditional medicine.

Maybe for once, the poor people of the countryside – the Indigenous and farmers – might be better off than people in the cities … We don’t need the grocery store if we are able to practise what our ancestors knew how to do. The land will take care of us.

Indigenous groups in Colombia operate an independent healthcare programme called the Indigenous System of Intercultural Health (SISPI) that allows for different conceptions of illness. A coordinator of the program in Cauca, Tatiana Tote, explained, “We respect the danger of this virus, but there’s no intrinsic fear … We’re working from a healthcare approach, from spirituality, and from each household to prevent and to take care of each other.”

Leaders in the state are also setting up a seed exchange between communities from different environmental regions to strengthen each reserve’s food sovereignty. Teams are mobilising to plant fast-growing crops that will be edible in two to four months.

“Maybe for once, the poor people of the countryside – the Indigenous and farmers – might be better off than people in the cities,” Jhoe Sauka said. “We don’t need the grocery store if we are able to practise what our ancestors knew how to do. The land will take care of us.”

Not all Indigenous people in Colombia are equally positioned to marshall these strategies. In the arid Guajira department, the Wayuu people, Colombia’s most populous Indigenous group, fear that isolation will fatally exacerbate existing food and water shortages. The state’s unforgiving, desert environment allows little food to grow, and frequent droughts are made worse by Latin America’s largest open-pit coal mine, which usurps much of Guajira’s scarce water supply. Since at least 2013, hundreds, if not thousands, of Wayuu children have died because of thirst.

The Wayuu and other Indigenous groups like the Tikuna and Cocama have asked the Colombian government for urgent humanitarian aid, denouncing state neglect and inadequate social services. On a national level, the Ethnic Commission for Peace, which represents minorities in Colombia, submitted a letter to President Duque requesting food security and support for their local, autonomous organisations. 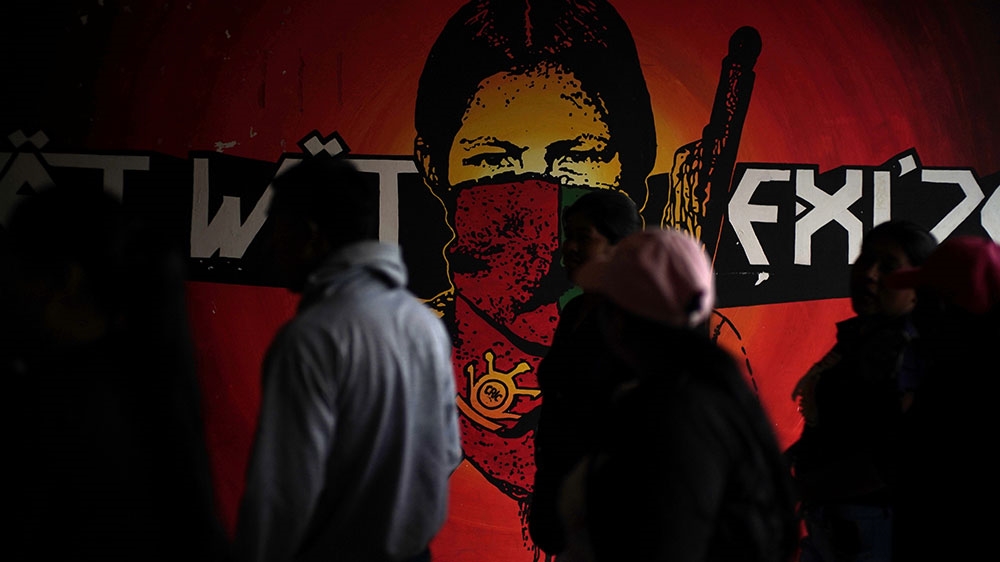 Members of the Nasa Indigenous tribe walk in front of a mural depicting an Indigenous Guard [File: Federico Rios/Reuters]

In response, the Colombian Ministry of the Interior initiated a campaign on April 2 to deliver food and supplies to the most vulnerable communities from predominantly minority ethnic groups. But two weeks later, more than 3,000 Indigenous members of the programme complained that they had not received the promised aid. Indigenous leaders are turning to crowdfunding in lieu of state support.

The Ministry of the Interior did not respond to Al Jazeera’s request for comment by the time of publication.

“We know that the health system in Colombia is already precarious, but it is even worse in Indigenous communities,” Dario Mejia Montalvo, a representative from the ONIC, told Al Jazeera. Dario belongs to the Zenu people, who declared a state of emergency in their reserves on March 18.

“One of the concerns is that our population is very poor with little income except from informal day work, which is now gone,” he said. “Many households don’t have potable water to wash hands, and with large families living in close quarters, we know the disease will propagate very quickly for us.” He worries that high rates of malnutrition will weaken people’s defenses if they are infected. 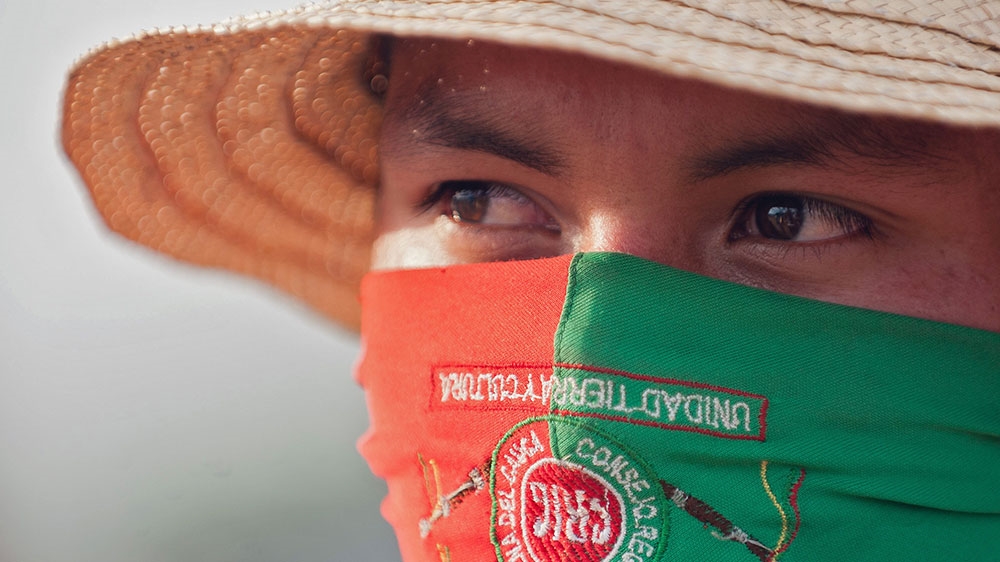 Dario was one of the first leaders at ONIC to call for a unified Indigenous strategy against the pandemic. The organisation has now created a system of territorial monitoring, and every day, it publishes a bulletin aggregating on-the-ground information from reserves throughout the country that show the location of potential new coronavirus cases. Each bulletin concludes with the statement: “The survival of Indigenous Nations is an ethical imperative for all society as guardians of historical memory.”

With COVID-19’s higher mortality among older age brackets, Indigenous groups face another risk: “Our elders are the ones who carry our languages, our traditional wisdom,” Dario said. “If they are affected, we could lose the very essence of our identity as distinct peoples.”

Protecting against the virus – and armed groups

Despite the national lockdown and the United Nations’ call for a global ceasefire, armed conflict in Colombia has not stopped. The Colombian military is still fighting illegal armed groups during the lockdown. A 14-year-old Indigenous boy in Tacueyo, Cauca, was killed by a stray bullet from one of these confrontations on April 15 while he was at home with his mother. The week before, ONIC shared a video on social media showing hordes of people from an Indigenous community in the Choco department cramming into canoes to flee their village, Bojaya. Sustained confrontations between the National Liberation Army (ELN) rebel group – who had previously agreed to a ceasefire during the pandemic – and paramilitaries known as the Gaitanista Self-Defense Forces of Colombia (AGC), forced the community to choose possible COVID-19 exposure over the risk of dying by gunfire.

At least 800 social leaders have been assassinated since 2016, including 14 killed during the first three weeks of the lockdown. Many activists fear that armed groups are taking advantage of quarantine to carry out violence unimpeded. The UN envoy to Colombia, Carlos Ruiz, denounced the continued killings at a UN Security Council meeting on April 14. 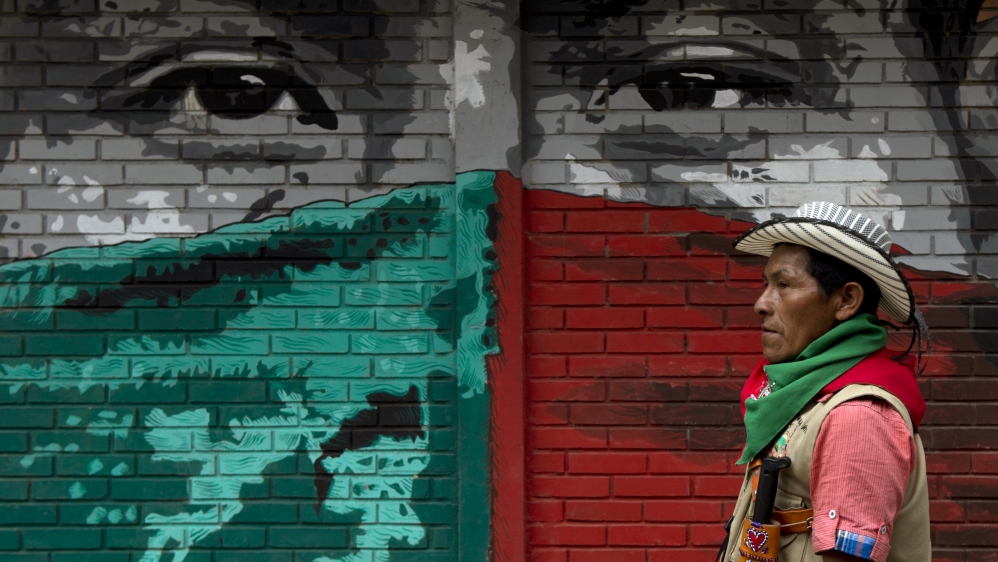 An Indigenous Guard from the Nasa tribe walks by a mural in Toribio, department of Cauca, Colombia [Luis Robayo/AFP]

Indigenous authorities and the Guard in Cauca are among the most victimised by these assassinations, and they are again being targeted for enforcing the lockdown. In Jambalo, where violence broke out earlier in the month, a dissident faction of the Revolutionary Armed Forces of Colombia (FARC) rebel group posted pamphlets threatening to attack the Guards if they do not lift the checkpoints. Narco-trafficking in the region creates high incentives for illegal groups wanting to continue business.

Despite the danger, the Guard and community volunteers like Edinson say they will not let up. “We’re not going to just let ourselves die so easily,” he said. “If we can get through this pandemic, we can face anything.”

Italy to loosen lockdown from May 4: Coronavirus live updates | News

Pluto: The Magnificent And Gigantic Comet

Proven Advice To Save You Money On Your Car Insurance Bill

US has its worst day yet, with more Covid-19 cases and deaths than at any stage of the pandemic