The southeast Asian nation reported its first case on March 21 but has not recorded any deaths among its population of less than 1.3 million. One person has recovered.

The United Kingdom’s novel coronavirus outbreak is starting to peak but it is too early to lift the lockdown because the virus would “run rampant” if the government eased social distancing measures, Health Minister Matt Hancock says.

The United Kingdom’s hospital death toll from COVID-19 rose by 761 to 12,868 as of 1600 on April 14, the health ministry says, though broader statistics suggest the total toll is much larger.

“If we just released all the measures now then this virus would run rampant once again and we can’t let that happen,” Hancock said.

07:00 GMT – Trump steps up pressure on China as US deaths mount

The US is stepping up its pressure on China over the coronavirus pandemic, with President Donald Trump saying that his administration was trying to determine where the deadly disease originated from, and Secretary of State Mike Pompeo calling on Beijing “to come clean” on what it knows.

At a White House news conference on Wednesday, Trump was asked about the reports of the virus escaping from a laboratory in Wuhan, where the coronavirus first appeared.

“We are doing a very thorough examination of this horrible situation that happened,” he said. 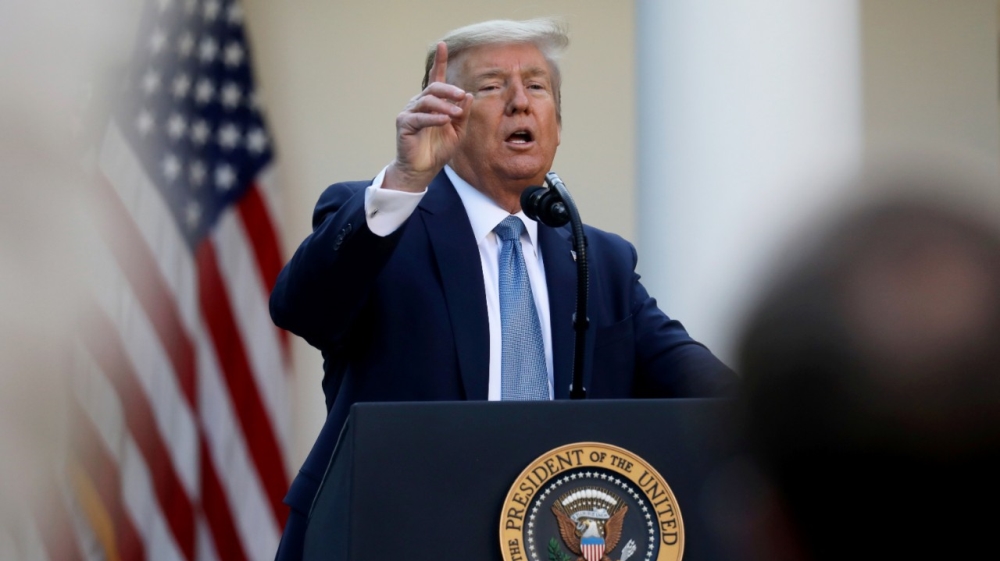 The number of people filing for unemployment benefits in the Netherlands soared 42 percent in March as many businesses were shut down in an attempt to contain the spread of the coronavirus in the country.

The Dutch federal employment agency on Thursday says it had paid benefits to 37,800 new unemployed in March, an increase of 11,200 from the month before. The strongest increases were among people who used to work in restaurants and bars and among people under 25 years of age, the agency said.

The Dutch government on March 15 ordered all restaurants, bars, museums, sport facilities and other public places in the Netherlands to shut down in the fight against the coronavirus pandemic.

06:30 GMT – Poland to reopen parks and forests on Monday as it starts easing curbs

Poland will reopen parks and forests on Monday and then revise the rules on the number of customers allowed in shops, as the country starts to loosen its coronavirus lockdown, State Assets Minister Jacek Sasin says.

Poland’s prime minister is expected to announce on Thursday details of the government’s plan for easing restrictions on public life, which were launched to curb the spread of the virus.

“Final decisions will be taken today. I think that first, starting from Monday we can expect opening of forests, green areas,” Sasin told private radio RMF. He added that Poland will also revise the rules on the number of customers allowed in shops at a time, but did not say when they would come into effect. 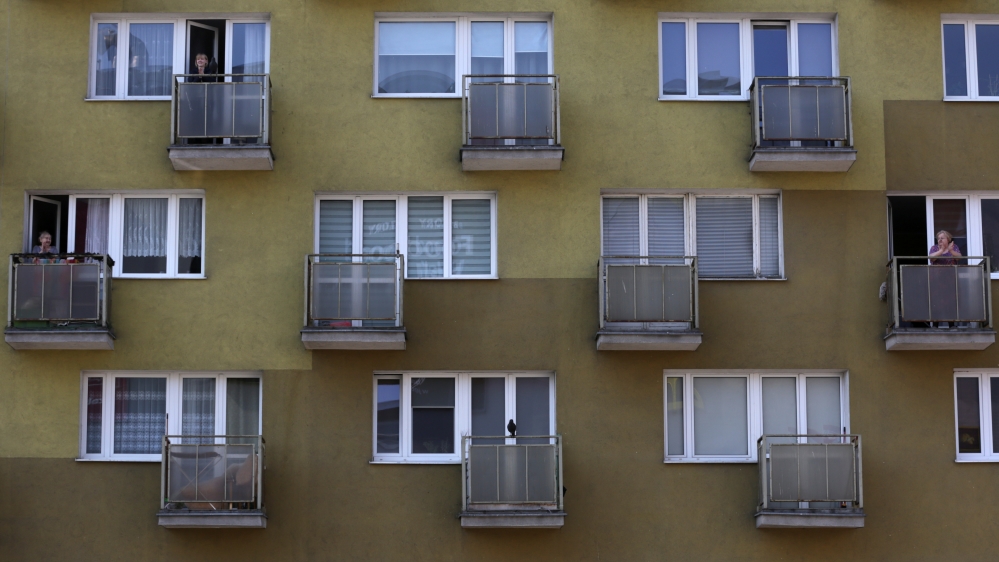 Women applaud on their balconies as they join the action #BrawaDlaWas (#ApplaudingYou) to appreciate all healthcare professionals, during the outbreak of the coronavirus in Gdynia, Poland [Matej Leskovsek/Reuters]

Around 20 French sailors remain in hospital following a large outbreak of the coronavirus in the French aircraft carrier Charles de Gaulle’s naval group, a spokesman for the French navy says.

“There are about 20 at the moment in hospital. Out of the 20, one is in the re-animation ward and in a stable case,” spokesman Eric Lavault told RMC radio.

On Wednesday, the French armed forces ministry said 1,767 marines – nearly all from the Charles de Gaulle carrier itself – had been evaluated and at least 668 had tested positive for the virus.

The Retired army captain, who has has used a walker move around since breaking his hip, has set himself the target of walking the 25 metres around his garden 100 times before his 100th birthday later this month.

I’m Captain Tom Moore, war veteran, 99 years of age (soon to be 100) and I’m walking for the NHS to raise money for our heroes.https://t.co/M1dkvoV3kE

Britain should ask for an extension to its post-Brexit transition period to ease uncertainty at a time when the world economy is being hammered by the coronavirus pandemic, the head of the International Monetary Fund says.

“It is tough as it is. Let’s not make it any tougher,” Kristalina Georgieva, the IMF’s managing director, told BBC radio in comments broadcast on Thursday.

“My advice would be to seek ways in which this element of uncertainty is reduced in the interests of everybody, of the UK, of the EU, the whole world.”

Germany’s confirmed coronavirus cases have risen by 2,866 to 130,450, data from the Robert Koch Institute (RKI) for infectious diseases shows, meaning the number of new infections rose for a second consecutive day.

Australia will keep in place restrictions implemented to curb the spread of the coronavirus for at least four more weeks, says Prime Minister Scott Morrison, despite signs that Canberra has been successful in slowing infection rates.

Morrison says Australia will over the next month expand testing, improve its capacity to trace contacts of known coronavirus cases, and plan a response to any further local outbreaks.

Morrison says these three steps will be finished within four weeks, and Australia will then review the restrictions that include curtailing the movements of residents, and the closures of schools, restaurants and pubs.

Thailand is reporting 29 new coronavirus cases and 3 new deaths, bringing it to a total of 2,672 cases and 46 fatalities since the outbreak there escalated in January.

Of the new cases, 14 patients are linked to previous cases, five have no links to old cases, and 10 who tested positive are awaiting investigation into how they were infected, says Taweesin Wisanuyothin, a spokesman for the government’s Center for COVID-19 Situation Administration.

Hello, this is Joseph Stepansky in Doha taking over from my colleague Zaheena Rasheed

Jacinda Ardern, New Zealand’s prime minister, says most restrictions on movement and social contact will remain in place even if the country eases a strict nationwide lockdown.

Legislators in New Zealand will decide whether to ease the level four lockdown on Monday.

Under Ardern’s level three plan, some businesses can reopen if they comply with health and safety requirements and contactless engagement with customers. Restaurants and some shops can open, but only for online and phone purchases and contactless delivery.

Primary schools will reopen but attendance will be voluntary. Funerals and weddings can take place, but are limited to 10 people.

“By design, Level 3 is a progression, not a rush to normality. It carries forward many of the restrictions in place at Level 4, including the requirement to mainly be at home in your bubble and to limit contact with others,” she says.

The remaining students at middle and high schools and some elementary school students will begin remote learning today.

The move to online classes is triggering mixed emotions, however, with many teachers lamenting lack of training in the use of digital tools.

Read more on this from Kelly Kasulis in Seoul. 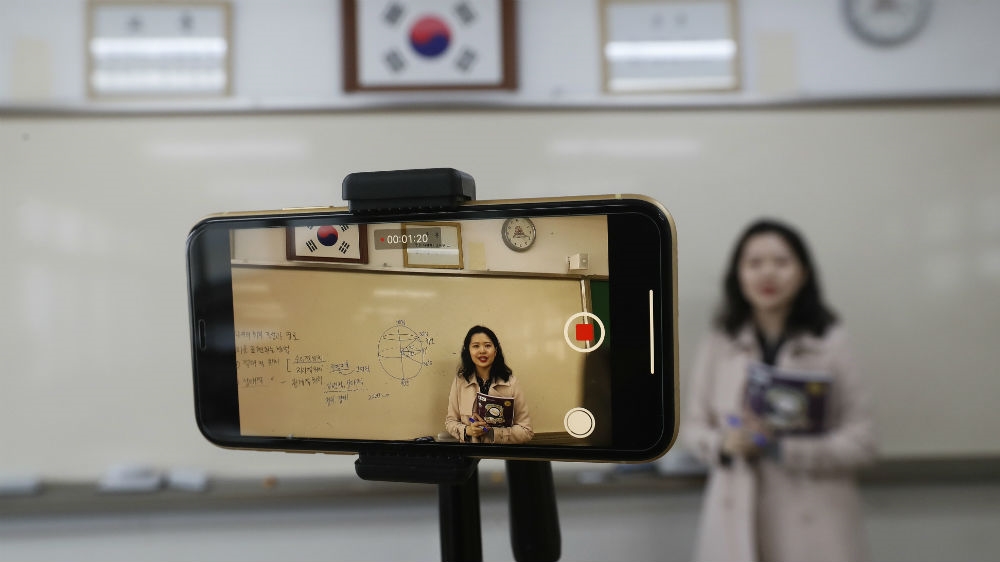 The move comes as Singapore reported a record 447 new cases on Wednesday, of which 404 involved migrant workers residing in dormitories.

The figure brings the city state’s total confirmed cases to 3,699. Ten people have died from the coronavirus in Singapore.

03:28 GMT – Breweries in Japan shift from sake to sanitiser

Sake breweries across Japan are producing high-alcohol content liquids for use in place of the alcohol-based sanitisers amid a shortage of disinfectants, Kyodo news agency reports.

“I was surprised by how many inquiries we received from hospitals and medical staff as well,” he says.

On April 10, Japan’s health ministry approved the use of alcoholic drinks as hand sanitisers due to dire shortages of the product in Japan.

The governors of the US states of New York and Maryland and Pennsylvania are ordering residents to wear face masks in public spaces.

“I am issuing an Executive Order today that all people MUST wear a mask or face covering in public in situations where social distancing is not possible,” says Andrew Cuomo, governor of New York. The order takes effect on Friday.

For example, if you are riding on public transit where it is impossible to maintain social distancing, or walking on a busy sidewalk, you must wear a face covering like a bandana or a mask.

Larry Hogan, the governor of Maryland, says masks and face coverings will be required “when inside any retail establishments, including grocery stores and pharmacies, or when riding any form of public transportation in Maryland”. The order is effective from Saturday onwards.

The governors of Connecticut and Pennsylvania are also recommending residents of their states wear masks in public.

The DP and its ally are likely to secure 180 seats in the 330-member assembly, the Yonhap news agency reports citing electoral authorities. The main opposition United Future Party is likely to win 103 seats, it adds.

The preliminary voter turnout stands at 66.2 percent, the highest in 28 years.

South Korea has recorded a total of 10,613 confirmed infections and 229 deaths from the coronavirus so far. In February, it had the largest outbreak outside of China, but brought the virus under control with a programme of mass testing and meticulous contact tracing.

Health authorities in China are reporting 46 new cases of confirmed coronavirus infections, of which 34 are imported and 12 are domestic transmissions.

Of the 12 local cases, three are in China’s capital, Beijing, five in Guangdong province and four in Heilongjiang province.

There are no new cases in Hubei, the province formerly at the epicentre of China’s outbreak.

The IMF says the coronavirus pandemic is likely to bring Asia’s economic growth to a standstill for the first time in 60 years.

“These are highly uncertain and challenging times for the global economy. The Asia-Pacific region is no exception. The impact of the coronavirus on the region will be severe, across the board, and unprecedented,” says Changyong Rhee, director of the IMF’s Asia and Pacific Department.

Governments must offer targeted support to hardest-hit households and firms, he says, adding that the crisis requires “a comprehensive and coordinated policy response”.

Economic growth in #Asia is expected to stall at 0% in 2020—the worst growth performance in almost 60 years. https://t.co/Nr3tD5nnGb #IMFBlog #IMFmeetings pic.twitter.com/yLYZISwuzJ

The zero growth projection for Asia is worse than the 4.7 percent average growth rates recorded in the region during the global financial crisis of 2008.

Hello, I’m Zaheena Rasheed in Male, Maldives, with Al Jazeera’s continuing coverage of the coronavirus pandemic. You can find all the updates from yesterday, April 15, here.

Amazon Echo Buying Guide: There’s a smart speaker for everyone

Burlington: This discount chain plans to move in where stores are closing across America