As some countries report signs of progress in the coronavirus battle, including the slowing down in the number of hospitalisations in parts of the US, authorities urged caution and called for continued observance of measures that help contain the disease, as the global death toll inches closer to 100,000 as of Friday.

In the United States, the death toll has surpassed 16,500. But the number of newly hospitalised patients in the hardest-hit state of New York dropped.

The apparent progress in efforts to slow the spread of the highly contagious virus was also reflected in fresh computer models scaling back on Thursday the projected nationwide death toll to 60,000, down from earlier forecasts of at least 100,000.

Still, the pandemic is taking a toll on the US economy with unemployment expected to hit 15 percent this month – a number not seen since the Great Depression.

In the United Kingdom, the death toll rose by 881 in 24 hours, officials said on Thursday, as Prime Minister Boris Johnson was moved out of intensive care but remained in hospital.

Worldwide, there are now more than 1.5 million confirmed cases of coronavirus but of that number close to 354,000 have already recovered.

Thailand has reported 50 new coronavirus cases and the new death of a 43-year-old woman.

Of the new cases, 27 are linked to previous cases and eight who are waiting for investigation into how they caught the disease, said Taweesin Wisanuyothin, a spokesman of the government’s Center for COVID-19 Situation AdministrationThree of the new cases were imported, Wisanuyothin said.

Since the outbreak escalated in January, Thailand has reported a total of 2,473 cases and 33 fatalities, while 1,013 patients have recovered and gone home.

Hello, this is Joseph Stepansky in Doha taking over from my colleague Ted Regencia.

The United States Centers for Disease Control and Prevention (CDC) has announced the extension of a ‘No Sail Order’ for all cruise ships amid the coronavirus pandemic.

According to the CDC, the order will only be lifted after the expiration of the US Secretary of Health and Human Services’ declaration that COVID-19 constitutes a public health emergency, the CDC Director rescinds or modifies the order based on specific public health or other considerations, or third, 100 days from the date of publication in the Federal Register.

According to the statement, there are approximately 100 cruise ships remaining at sea off the East Coast, West Coast, and Gulf Coast of the United States, with nearly 80,000 crew onboard.

South Korea has reported 27 new cases of the coronavirus, marking its ninth consecutive day below 100, as infections continue to wane in the worst-hit city of Daegu.

While the country’s caseload has slowed from early March, when it was reporting around 500 new cases per day, KCDC director Jeong Eun-kyeong has raised the possibility of a broader “quiet spread,” pointing to recent transmissions at bars and other leisure facilities that could indicate eased attitudes toward social distancing. 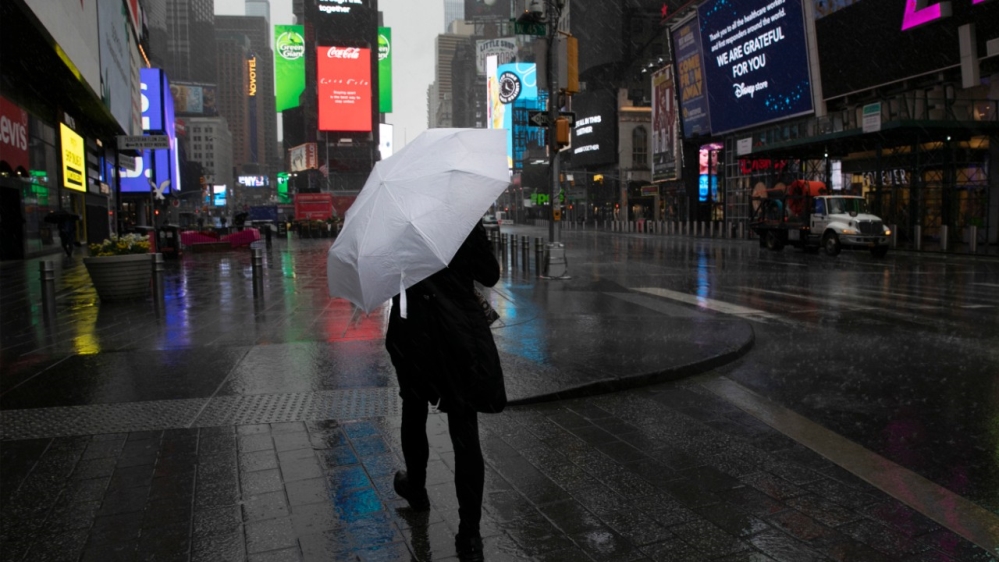 A staggering 16.8 million Americans have lost their jobs in just three weeks, a measure of how fast the coronavirus has brought world economies to their knees.

Numbers released on Thursday by the US government showed that 6.6 million workers applied for unemployment benefits last week, on top of more than 10 million in the two weeks before that. That amounts to about 1 in 10 American workers – the biggest, fastest pileup of job losses since the world’s largest economy began keeping records in 1948.

And still more job cuts are expected. The US unemployment rate in April could hit 15 percent – a number not seen since the end of the Great Depression.

The Malaysian company, which makes one out of every five gloves in the world, will have a facility ready in two months with a production capacity of 110 million masks a year.

“The masks … will also be available for sale to our existing healthcare customers, in order to help the market cope with the surge in demand on the back of the COVID-19 pandemic,” said Executive Chairman Lim Wee Chai.

One hundred Italian doctors have died after contracting coronavirus since the pandemic reached the Mediterranean country in February, Italy’s FNOMCeO health association said on Thursday.

“The number of doctors who have died because of COVID-19 is 100 – perhaps even 101 at the moment, unfortunately,” a spokesman for the association told AFP. 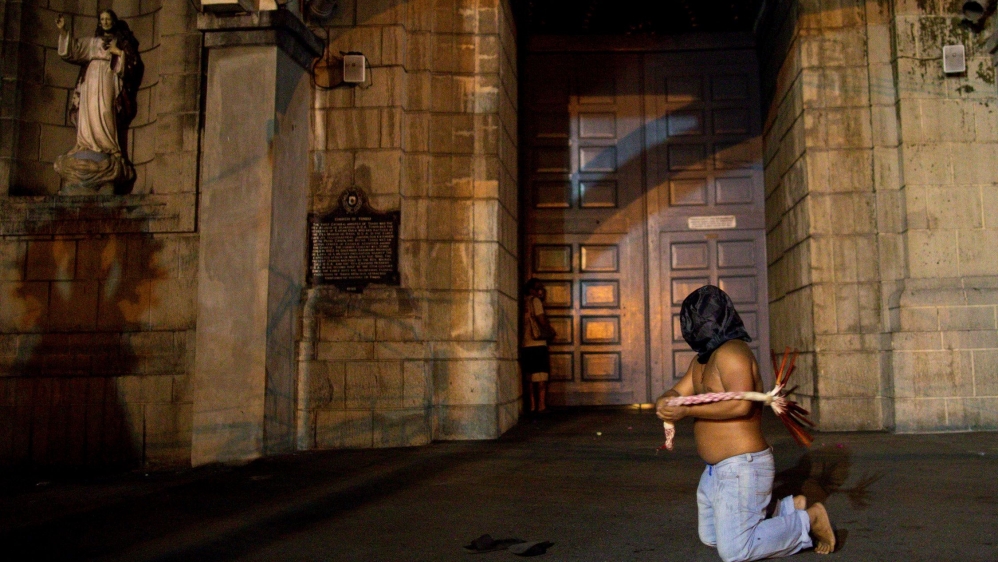 A masked Filipino penitent kneels while performing self-flagellation outside a closed church on Good Friday, defying the government’s orders to stay indoors due to the threats of the coronavirus disease in Manila [Eloisa Lopez/Reuters]

Mexico has recorded its first two deaths of pregnant women from the coronavirus as the overall number of fatalities in the country reached 194, according to the country’s health ministry.

One of the two women gave birth to a son before passing away, Deputy Health Minister Dr Hugo Lopez Gatell told a news conference, noting that pregnant women are highly susceptible to infection caused by the virus. For a short time the baby boy had respiratory problems and is still delicate, he added.

Adding to their risk factors for developing complications from the coronavirus, both women were clinically obese, while one had hypertension and the other had diabetes, Lopez Gatell was quoted by Reuters news agency as saying.

Early voting in South Korea’s parliamentary election kicked off on Friday, with coronavirus patients casting ballots at designated stations and candidates adopting new ways of campaigning to limit the risk of contagion.

The National Election Commission (NEC) set up eight polling stations to be used by more than 3,000 coronavirus patients receiving treatment as well as 900 medical staff at treatment centres in hard-hit areas, including the capital Seoul and Daegu city, according to Reuters news agency.

The election itself is on April 15, but officials are hoping that people will take advantage of early voting options to reduce the number of voters crowding polling locations on that day. 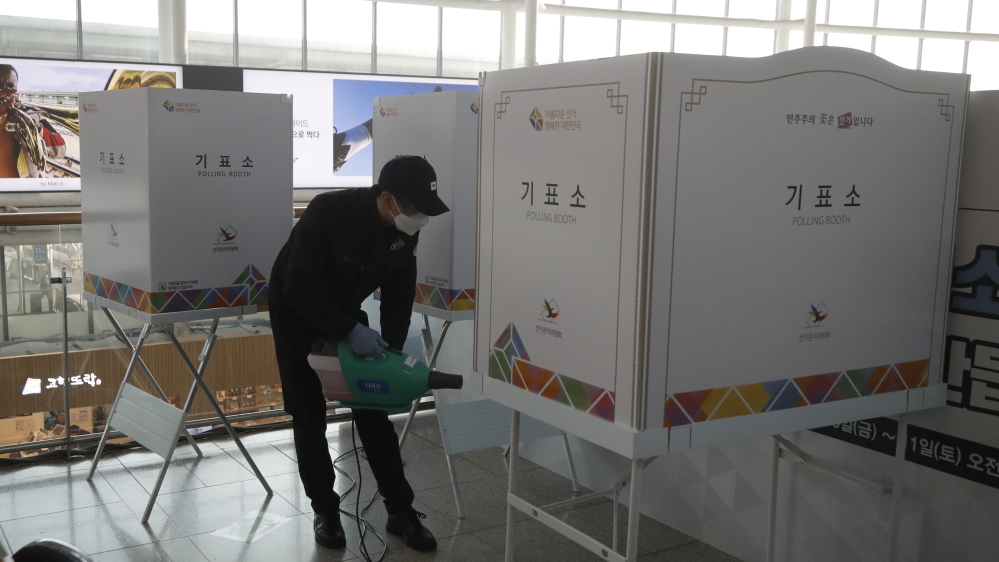 The early voting for the April 15 general elections will be held for two days on April 10-11 at 3,508 polling stations across the country [Lee Jin-man/AP]

Some 450 inmates and staff have tested positive for coronavirus in the US city of Chicago’s largest jail, county corrections officials said, representing one of the nation’s largest outbreaks of the respiratory illness at a single site so far in the pandemic.

The surge of cases at Cook County Jail marks the latest flare-up of COVID-19 at jails and prisons in large cities across the US, where detainees often live in close quarters.

China has accused Taiwan of “venomously” attacking the World Health Organization (WHO) and conniving with internet users to spread racist comments, after the agency’s chief said racist slurs against him had come from the island.

Taiwan, claimed by China as its sacred territory, has responded angrily to WHO Director-General Tedros Adhanom Ghebreyesus’ assertion that “racist slurs” against him had originated in Taiwan, and demanded he apologise saying the accusations are nonsense.

Taiwan’s exclusion from the WHO, due to China’s objections, has infuriated the Taipei government during the coronavirus outbreak.

China on Friday reported 42 new cases, 38 of them imported, along with one additional death in the hardest-hit city of Wuhan.

Another 1,169 suspected cases or those who tested positive but were not showing symptoms, were being monitored under isolation. China now has reported a total of 81,907 cases and 3,336 deaths from the virus. More than 77,000 of those who were infected have recovered. 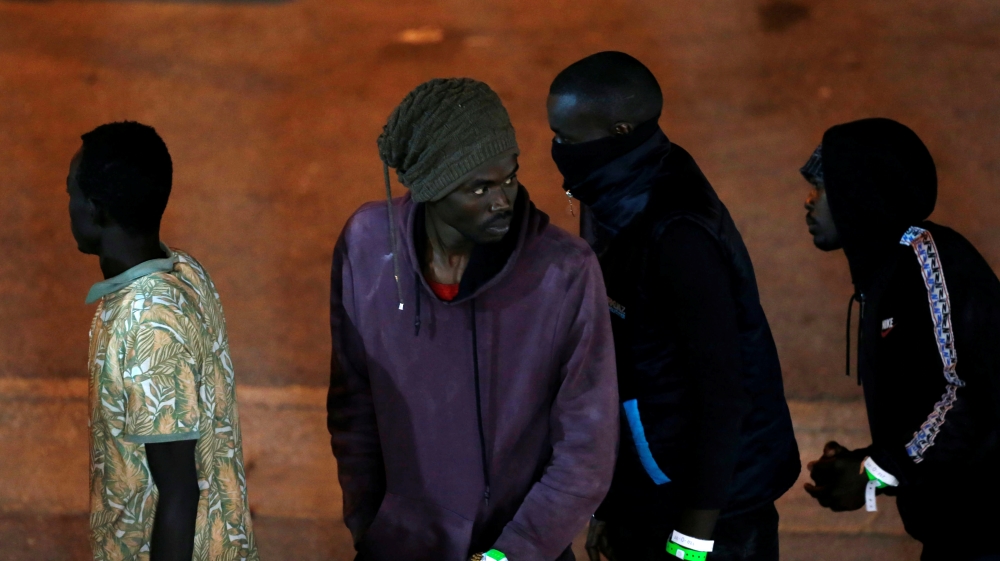 Rescued migrants wait in line after disembarking a military vessel which arrived in Senglea in Valletta’s Grand Harbour early on Friday, after an outbreak of the coronavirus disease in Malta [Darrin Zammit Lupi/Reuters]

California saw its first daily decrease in intensive care hospitalisations during the coronavirus outbreak, a key indicator of how many healthcare workers and medical supplies the state needs, Governor Gavin Newsom said on Thursday.

The rate of all virus hospitalisations has slowed this week. Those in the ICU need the highest level of care, and so it was particularly encouraging that the number of patients in those rooms actually dropped 1.9 percent on Wednesday to 1,132, The Associated Press news agency reported.

Read all the updates from yesterday (April 9) here.

A Guide to Studying in Scotland