The presumptive Democratic nominee for president, Joe Biden, is under increasing pressure to substantively address allegations by a former staffer in the United States Senate that he sexually assaulted her in the basement of a Capitol Hill office building when she worked in his office in the early 1990s.

The clamour comes even as the former vice president clinched another primary victory in the state of Ohio on Tuesday, inching closer to locking down enough delegates to secure the nomination at the party’s convention in Milwaukee in August.

Biden has denied the accusations from former aide Tara Reade, and many Democrats insist they are politically motivated but the drip of news is now forcing his supporters, among them potential vice presidential candidates, to step up and defend him.

US Senators Kamala Harris and Amy Klobuchar – both potential vice presidential selections – avoided the issue when asked about Reade’s allegations in recent interviews and instead praised Biden personally, and Senator Kirsten Gillibrand, one of the most outspoken advocates of the #MeToo movement, said in a call with reporters on Tuesday that she “stands by” Biden.

“He’s devoted his life to supporting women and he has vehemently denied this allegation,” Gillibrand said.

In an interview with The Associated Press news agency earlier this month, Reade said she had told at least four people about the incident, including her deceased mother and her brother, who has spoken publicly about the matter. One individual told the agency on the condition of anonymity that Reade told them about the alleged assault when it happened, and another said Reade told them in 2007 or 2008 about experiencing sexual harassment from Biden while working in his Senate office.

Earlier this week, Lynda LaCasse, who was Reade’s neighbour in the 1990s, says Reade also told her about the alleged assault around the time it happened. LaCasse said that when they were neighbours in 1995 or 1996, Reade told her “about the senator that she had worked for and he put his hand up her skirt”.

“She felt like she was assaulted, and she really didn’t feel there was anything she could do,” LaCasse told Business Insider.

A second woman, Lorraine Sanchez, worked with Reade for California state Senator Jack O’Connell from 1994 to 1996. Sanchez told Business Insider that Reade said “she had been sexually harassed by her former boss while she was in DC” and was fired for voicing her concerns.

Reade did not respond to questions from the AP about why she did not mention the women in earlier interviews as people who could corroborate her story. She said that she had been asked not to share the women’s contact information with news organisations.

The Biden campaign declined to comment on the new interviews, pointing to an earlier statement from deputy campaign manager and communications director Kate Bedingfield. The statement said that while sexual assault claims should be “diligently reviewed by an independent press”, what Reade alleged “absolutely did not happen”.

Reade said in past interviews that Biden pushed her against a wall in the basement of a Capitol Hill office building, groped her and penetrated her with his fingers. She said after telling her supervisors in Biden’s office that she had been sexually harassed by the then-senator, her concerns were not taken seriously and she was eventually told to find another job.

Two of those staffers have said in interviews that they did not recall Reade or any such incident. The third issued an on-the-record statement denying Reade’s claim.

Late last week, the Intercept unearthed a 1993 video clip that shows a woman Reade says was her mother calling into CNN’s Larry King Live. In the clip, an unnamed woman from San Luis Obispo, California, tells King that her daughter just left Washington, “after working for a prominent senator, and could not get through with her problems at all, and the only thing she could have done was go to the press, and she chose not to do it out of respect for him”.

Early in 2019, eight women, including Reade, came forward with allegations that Biden made them feel uncomfortable with inappropriate displays of affection. Biden acknowledged the complaints and promised to be “more mindful about respecting personal space in the future”.

The AP spoke with Reade about those complaints in April 2019. During that interview, Reade alleged that Biden rubbed her shoulders and neck and played with her hair, and that she was asked by another aide in Biden’s Senate office to dress more conservatively and told “Don’t be so sexy.” The AP declined to publish details of the interview at the time because reporters were unable to corroborate her allegations and aspects of her story contradicted other reporting.

Reade came forward in March with the additional allegation of assault during a podcast interview with Katie Halper. 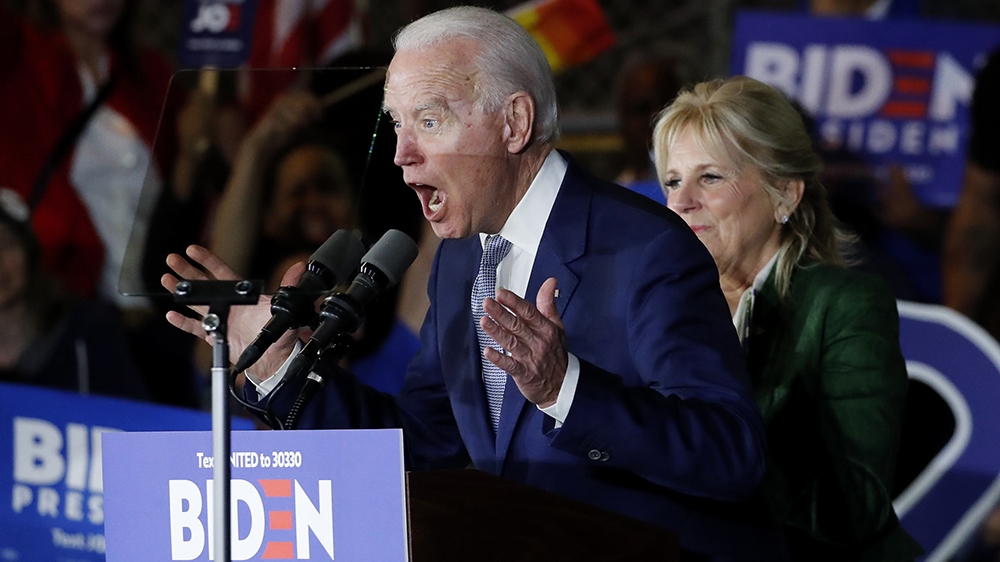 Joe Biden addressing supporters as his wife Jill looks on during his Super Tuesday night rally in Los Angeles, California, US [Mike Blake/Reuters]

The Republican National Committee and other allies of President Donald Trump have been highlighting Reade’s allegations against Biden, though the president has not raised them himself. Trump has faced numerous allegations of sexual assault, allegations he denies. He also apologised during the 2016 campaign for comments he made during an interview with Access Hollywood in which he bragged about using his celebrity to assault women.

Reade, a longtime Democrat who supported both Senators Elizabeth Warren and Bernie Sanders in the primary, said she will not be voting for Trump or Biden in November. While Trump has faced allegations of sexual assault that are more severe and numerous, Reade said she felt either was a similarly bad option.

“It’s sad statement about our own culture that we are having to choose between two men that have allegations of sexual assault and sexual harassment and a history of misogyny,” Reade said.

Corporate Social Responsibility (CSR) In Education: Why Invest In Education As CSR in India?

Amazon Echo Buying Guide: There’s a smart speaker for everyone

Burlington: This discount chain plans to move in where stores are closing across America